This bracelet is made of Mountain crystal quartz.  This unique gemstone that carries the pure energy of mountains. Learn more about this bracelet below.

It is a type of quartz that was recently discovered (in 2006) after the Himalayan glaciers melted as a result of global warming.

Aboriginal people of this area believe that these crystals retain the knowledge of all Buddhist masters who have lived in this area. It is said that these crystals can help to induce a state of Buddhist enlightenment, ie. nirvana. These crystals generally awakens dormant energy at both physical and mental levels and unlocks hidden potential in people. It is also a great stone for meditation because it brings a deeper mental connection.

Historically quartz was nicknamed as “frozen light”, “sacred water” or “dragon essence”. The Buddhists have labeled this stone as “visible nothingness,” and the Australians call it “fossilized light” and believed that it contains the Great Spirit. In Greek tradition, it was called “pure ice” –  acc.to the legend it was shattered into thousands of pieces after Hercules had dropped it from mount Olympus. 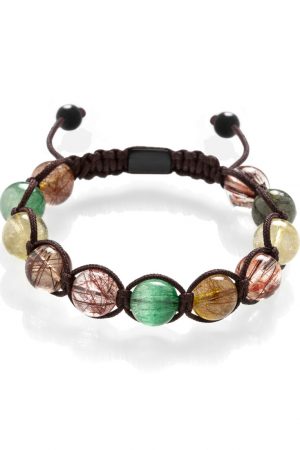